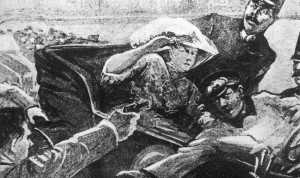 On June 28, 1914 Gavrilo Princip was one of seven assassins spaced along the Appel Quay in Sarajevo waiting for the motorcade of the Archduke Ferdinand.  The first of the seven lost his nerve as the cars passed.  The second rolled a grenade under the royal car, but the bomb had a long fuse and exploded under the next car in line.  Naturally, panic ensued and the rest of the motorcade sped off before another assassination attempt could be made.

Later that day, Mr. Princip ducked into a cafe for a sandwich.  At about the same time, the Archduke and his wife decided to visit the two policemen wounded in the assassination attempt.  On the way to the hospital, the driver of the royal car took a wrong turn, directly in front of the cafe.  Upon discovering his error, the driver stopped to turn around and stalled the engine.  At that moment, Princip approached and from a distance of 5 ft. shot twice, killing both Archduke Ferdinand and Countess Sophie and igniting a series of events that led to World War I.

Timing is hard to get right.  A slow fuse in the morning and, hey! What great luck!  A wrong turn a couple of hours later and the world suffers 40 million casualties.  Timing, or fate, or luck, or whatever you want to call it has bedeviled man throughout time.  A good recent example is this sadly hilarious montage of Peter Schiff appearances from 2006-07 on various cable channels where he predicts exactly what ultimately happened to the economy while a chorus of skeptics laugh and mock him.

Unfortunately for Mr. Schiff, his timing was only partly right.  His call on real estate, stocks and the U.S. economy was spot on, but his thesis of a collapsing dollar and skyrocketing treasury bond yields was clearly not, at least not yet.  His recommendation to put money in commodities and foreign stocks has turned out to be, at least in some cases, as bad or worse than just leaving money in the plummeting U.S. stock market.  He may ultimately be right, but in this business, being early is a lot like being wrong.

So what to do?  Some people would advise us to do nothing.  They would say that getting in and out of the market is a fools errand and that we should hold firm, rebalance our portfolios while stocks are cheap and wait until the market rights itself.  That would be the bull argument.  Other people would say that the economy is a house of cards, the ridiculous amounts of debt the government is piling on imperils us for the foreseeable future and that the stock market is a rigged game anyway.  Buy hard assets or treasury bills and stay away from stocks.  That would be the bear argument.

We could probably all find at least some merit in both points of view, but it really doesn’t matter.  It’s fine to be a bull or a bear, as long as we acknowledge the possibility that we could be wrong, or our timing could be off.  Which is why I recommend the eel as an alternate choice.  What is the defining characteristic of the eel?  Slippery.

You might decide that a handful of blue chip stocks have fallen so far that they have to be close to the bottom.  But what if you’re wrong (or way too early)?  Plan for slippery.  Set a stop loss or buy puts to limit the downside.  A common failure of human nature is our tendency to give a disproportionate amount of credibility to an original decision.  Once we decide to make an investment, we are comforted by information that confirms the wisdom of that decision.  We discount the value of counter opinions (see the Schiff video above).  It is much harder to reverse a decision than it is to make it in the first place, which is why it’s important to build that provision into the original transaction.

You might decide that stocks aren’t worth the risk and that you’re better off just collecting interest on CD’s.   But what if we’re on the cusp of a turning point similar to that of 1932 or 1974?  Deciding to permanently sit out stocks at this point could cause you to miss the type of market lift-off that may only occur once in an investing lifetime.  Which points to another flaw in human nature.  We are mortal.  If you are 65 years old today, you were in your early 30’s the last time we experienced a market like this and probably had not yet accrued enough assets to make the experience nearly as meaningful.  Further, even though you may have experienced something that bore some resemblance to these conditions, there were still huge differences.  Our investing lifespans are just not long enough to teach us everything we’d like to know.  History is worth more than experience in times like these.  And history tells us that the current price of an asset has a lot to do with the future investment return from that asset.  Timing matters.

As bleak as things may look today for stocks & real estate, someday, probably before the economy shows signs of recovering, sentiment will turn and we will be presented with opportunities that haven’t been seen in a very long time.  It’s fine to be bearish right now, as long as it’s not a permanent state.  To ensure an eel like slipperiness, this is the time to define, specifically, the conditions that will warrant a return to the markets.  It doesn’t have to feel good at the time, in fact it probably shouldn’t, the reason for doing this is to build in a mechanism that allows us to override our emotional state at that moment.

PLC Asset Management is a Corvallis, Oregon based investment consulting and retirement planning practice. Our mission is to help clients achieve and maintain financial independence regardless of market condition. Our unique investment strategy makes every decision from a foundation of risk management.

Strictly intended for individuals residing in the states of OR, WA & CA. No offers may be made or accepted from any resident outside these states due to various state regulations and registration requirements regarding investment products and services.