In what may be the scientific breakthrough of the century, physicists from the National Autonomous University of Mexico have discovered a method of producing synthetic diamonds from tequila.  Seriously.  They superheat vapor from tequila to produce carbon atoms which are then deposited in the shape of a very thin diamond film which can be used as an alternative to silicon in computer chips or for ultra fine cutting instruments in medical procedures.  The scientists found that, “even the cheapest brands of tequila, averaging $3 a bottle, are good enough to make diamonds.”

First of all, let me just say that had I known physicists actually run tequila-based experiments, my career path could have been significantly altered.  More importantly, we really have to admire the courage of this discovery.  At some point, somebody had to convince a department head or a grantor or a colleague that devoting time to studying tequila vapor was an idea with merit.  That was bold.  Boldness is generally in short supply.  Boldness by itself isn’t enough though, innovation also requires an open mind.  A mind open enough to be willing to devote scarce resources to something that makes you uncomfortable.  Even if the proposal made great sense, there had to have been a nagging fear within whoever gave this experiment the green light that said, “if this fails I’m going to look like a complete moron.”

This type of fear reflects what is known as ‘reputational’ risk.  Reputational risk is what keeps investors inside the box of what is familiar and popular.  Its what keeps mutual fund and endowment managers from straying too far from their benchmarks.  Certain ideas, once studied, may appear to have great merit, but then we ask ourselves, “if its such a good idea, why isn’t everybody else doing it?”  And paralysis sets in.  Of course, not every new or uncomfortable idea  is worth pursuing due solely to being new or uncomfortable, but waiting for a general consensus before hopping aboard is a sure way to turn great potential into mediocrity.

Good investment ideas or strategies exploit inefficiency.  Once that inefficiency becomes well known, it disappears.  Take investing in foreign stocks for example.  This chart (courtesy of Bespoke Investment Group) shows how the correlation between emerging markets and the S&P 500 has evolved over time: 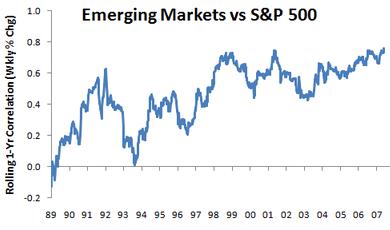 Twenty years ago, shares from countries like Korea, Brazil, India, Turkey, etc. were relatively undiscovered by U.S. investors and offered a growth oriented source of return that bore virtually no correlation to the U.S. market.  But who wants to be the first person on their block to buy stock in a Malaysian bank?  How would you even do it if you wanted to?  Back then it was difficult and expensive.  The shares were relatively illiquid and there wasn’t a whole lot to choose from.  Today, with the click of a mouse button, in addition to the countries mentioned above, you can buy shares of ETF’s that represent the stock markets of countries like Chile, Mexico, South Africa, China, Thailand, and many others.  Total annual operating expenses for these ETF’s?  Less than 1%.  But now that you can do it easily and inexpensively, do you still want to?  Is the opportunity still undiscovered enough to justify the risk?  Waiting for the opportunity to become comfortable and widely accepted has a cost.  In this case, the cost has been the almost total erosion of one of the primary reasons of looking far afield – non correlation.

This incredibly difficult environment has made almost every investment idea feel uncomfortable, but now, like always, the ability to keep an open mind and consider ideas on their own merits is paramount.  Past personal experience is important, but has limitations.  Looking for consensus is comforting, but not very profitable.  If you can limit exposure, take prudent risk management steps and consider facts dispassionately, boldness may be for you.

Disclosure: Past performance is not indicative of future results.  All indices are unmanaged and investors cannot invest directly into an index. The S&P 500 Index is a broad-based measurement of changes in stock market conditions based on the average performance of 500 widely held common stocks.  Ideas and opinions expressed in this article are the sole responsibility of Patrick Crook/PLC Asset Management and do not reflect any stated opinions of Commonwealth Financial Network, National Financial Services or any other person or entity.