This is a picture of our dog Kona.

Isn’t he handsome? Here he was as a puppy.

Everyone falls in love with the front half of the pup.  In Kona’s case, even now at three years old, we are constantly stopped by people that want to know what kind of dog he is and where we got him.  The friendly appearance of the big rumpled wookie/dog masks the effort it takes to keep him from destroying our home.  We walk him two or three, often more, times per day, every day, rain or shine.  It has taken a constant and unrelenting will to teach him how to behave in a society that has evolved beyond cave dwelling.  And, of course, the less handsome back end of the pup has a productive capacity that would make Henry Ford envious.  His appearance makes him a conversation piece, but he would be unsuitable as a pet if not for the drudgery that goes into him every day.

The superficial seems to have a disproportionate impact on society:

There would not be a demand for doodads like the Bloomberg twin ticker or the CNBC decabox were it not for the seduction of the superficial. Does Jim Cramer have an audience because his followers make money or because his show is entertaining?  If you think about the services that investors are attracted to, you’ll notice that they generally center around what to buy – articles that tell you the top ten stocks to own for the coming year, updates on which funds have reached 5-star ranking, newsletters that explain how to capitalize on the next impending disaster.  What you rarely see is a discussion on the boring stuff that could have a truly beneficial impact on almost every investor – how to think about and manage risk.  Specifically, the development of a consistent exit strategy and a well thought out approach to position sizing.

Appealing to the superficial is entirely logical, magazines and television networks don’t get paid for giving good advice, they get paid for putting eyeballs in front of advertisers and the mere mention of risk management is a powerful sleep aid.  It’s the most important factor in your returns, but the least glamorous.  The puppy’s hind end.

The exit strategy is important because market returns are out of our control.  An investor’s selection criteria may be flawed.  Research data could be faulty. Politics or new regulatory requirements could have an unexpected influence.  You won’t know in advance when a position will decline, but you do know that it will happen eventually.  You need a way of deciding how to escape before irreversible damage has been done.

The money management/position sizing strategy is important because you need to be able to accomplish two things: survive a streak of losses and make your winners big enough to have a meaningful impact.  Making the initial investment and sizing it correctly isn’t a particularly difficult task, it’s a matter of deciding how much loss you would be comfortable taking on a single position and reconciling that with the exit strategy.

The more difficult task is managing these position sizes after day one.  Once a position is established, everything starts to change.  Current prices move constantly.  Exit prices move higher.  Monitoring a portfolio in a comprehensive way is a juggling act – we want to let our winners run, cut our losers short, keep an eye on potential loss by position, by asset class and in total.  My solution for monitoring all of these moving parts for client accounts is a tool that I built to track and deliver a dashboard type view of all the relevant data on an ongoing basis. 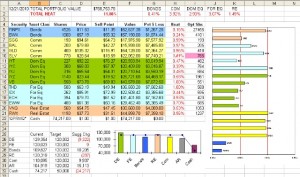 In one screen I can see the potential loss* by position, by asset class and for the portfolio in total.  Asset allocation can be viewed by both dollar amount and risk.  Before going any further, it’s important to note the limitations of a view like this.  First and foremost we have to acknowledge that “potential loss” really means “intended potential loss.”  There are a number of ways an investment can drop below a sell point or a sell stop before there is a chance to sell it. Risk management is rooted in probability, not certainty. Second, this tool doesn’t tell us what to do, but it puts us in a position to make decisions based on data rather than gut feel or emotion.

Having a detailed picture of our probable downside can help us figure out when to add or subtract from a position.  It can help us decide when and how to rebalance our allocations.  It can lead to a more informed understanding of what risk tolerance really means.  It’s not cute or exciting or even very interesting, but it is likely the most important component of portfolio management. 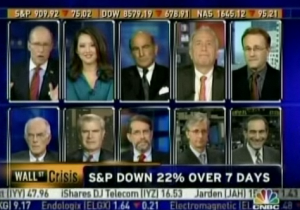 Disclosure: Past performance is not indicative of future results.  All indices are unmanaged and investors cannot invest directly into an index. Ideas and opinions expressed in this article are the sole responsibility of Patrick Crook/PLC Asset Management and do not reflect any stated opinions of Commonwealth Financial Network, National Financial Services LLC, Member NYSE/SIPC or any other person or entity.