Recently I conducted a review of a client account that has been here since January 2008. Every transaction was examined with the intention of comparing the final result to the amount of risk that was initially intended when the transaction was placed. For example, let’s say that we were putting $10,000 into the XYZ stock index etf with the following criteria: 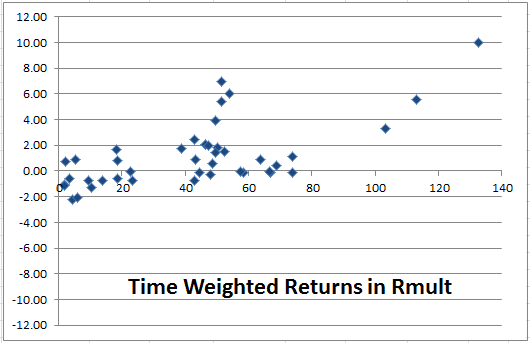 The chart above shows the length of time each position was held (in weeks) and the end result expressed as multiples of intended risk (Rmult). Bear in mind that this chart only shows the results of closed positions. Positions that were bought and are still open are not considered in this examination.

As with any trend following approach, the chart clearly shows a high correlation between the length of time a position was held and its ultimate profitability. Unfortunately, our imperfect ability to see the future prevents us from knowing in advance which investments will deliver those long, profitable trends and which will flame out early. So far, that’s been OK.

Over the period of this examination (January, 2008 – April, 2012), about 56% of the completed transactions were sold for a gain. The average gain delivered 2.68x intended risk, while the average loss was contained to -0.67x intended risk. If you can win more often than you lose and the wins are 4x the size of the losses, you enjoy a pretty significant statistical edge. This is the pruning effect in action. Losers are cut short and winners are left to run.

Possession of a statistical edge is what separates investing from gambling. Investing with a demonstrated statistical edge is, in my opinion, the only rational way to approach the markets. However, just having an edge isn’t enough. It doesn’t guarantee anything. In Three Ways To Ruin Your Edge we’ll talk about how to screw up a perfectly good advantage and how people regularly turn an edge into a liability.